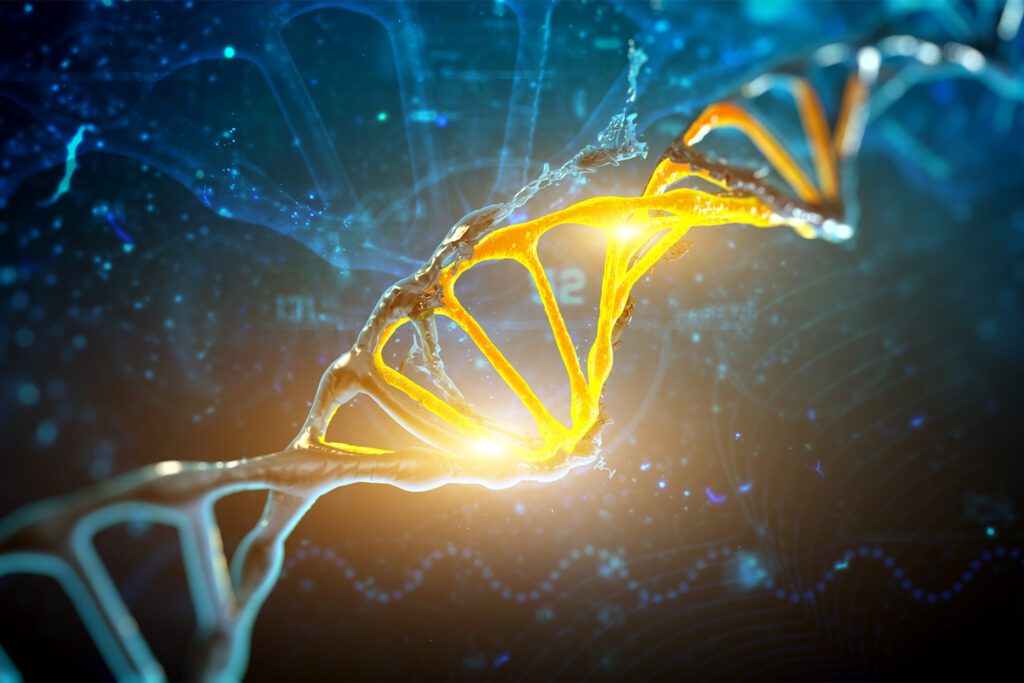 Before we get into the thick of the different types of genes, let’s dive a little deeper into what genes are. When hearing that something– whether a trait like having blue eyes or a diagnosis like heart disease– is genetic, we often think about our parents or grandparents passing things down like an unwanted heirloom.

However, there’s more behind the scene on a molecular level that is often not considered.

Deoxyribonucleic acid (better known as DNA) is a chemical that lives in every one of our many cells, specifically on the histones. It is transcribed by your cytoplasm and contains a code and instructions that make every single one of us unique and separate humans, animals, and plants alike.

Nobody has an identical DNA sequence or RNA sequence, including identical twins, but all DNA consists of adenine, cytosine, guanine, and thymine. Each chromosome forms base pairs with other chromosomes provided by the reproductive partner.

In other words, the female contributes one chromosome while the male contributes the other. This pair of chromosomes form a gene, and each gene contains introns, exons, and a variety of other essential factors.

Some chromosomes dominate others, while some traits seem to combine with one another. This is because of the different types of single genes, how they handle the interaction of two chromosomes, and how they are represented as phenotypes.

A phenotype is a characterized trait that can be determined upon observation. For example, a phenotype can be hair color, height, or how much clotting factor is in our blood.

A biotechnology company, Genflow Biosciences is even researching the possibility of medicine that targets genes that cause us to age.  A vast amount of gene types and genetic variations exist, so let’s break down five major types of genes in a comprehensive way.

Complementary genes require two dominant genes working together in order to produce a specific phenotype. In other words, both genes must be present together, or else the desired phenotype will not appear. One gene on its own cannot get the job done, nor can one dominant gene and one recessive gene. Both dominant genes complement each other.

Supplementary genes differ greatly from the complementary genes that depend on each other in order to produce one specific phenotype. Supplementary genes contain one dominant gene which is capable of expressing itself independently, while the second gene has the potential to express itself. However, it must be paired with the first gene to do so. In this case, an entirely different trait or phenotype can be expressed upon merging the two genes.

A common example used for this gene type is the mating of two mice, one black and one albino. The albino mouse on its own is not able to produce a colored coat, but when bred with the black mouse, the offspring’s expressed coat color is neither black nor white but a new brown color.

An interesting concept about these genes is that they can duplicate the nature of the phenotype.

An article by Dr. Francis Collins highlights the dangers of having duplicate clotting factor genes or insulin-producing genes as these could cause serious adverse health complications. This raises the question: why has evolution not eliminated potentially harmful duplicate genes from the gene pool by now?

Also known as additive genes, polymeric genes are similar to duplicate genes in that they have an additive or compounding effect on each other. However, polymeric genes do not necessarily have a pair of genes that express themselves in the same way.

Another more technical example is seen in the summer squash. Presented in an article by biologydiscussion.com, the combination of two different squash shapes— spherical and cylindrical– resulted in a completely new squash shape referred to as discoid.

These genes involve the X or Y sex chromosomes in our bodies that determine sex or how different traits will be inherited based on sex. Since individuals with XY chromosomes (males) have only one X chromosome, even recessive traits on X chromosomes from XX individuals (females) are more likely to be represented in XY individuals.

One popular example of this is color blindness. A mother (XX) who is colorblind and a father (XY) who is not, can have a colorblind son even though the genes representing color blindness are recessive. This is because the son only has one X chromosome. Therefore, it is likely that those recessive genes will still be expressed.

Over time, genes have the ability to deviate from their original form, and a small number of genes can differ between people. This is due to mutation genes that alter the structures that other genes form. For example, the SIRT6 gene is a gene that plays a major role in the control of our aging process by repairing DNA damage that occurs with time. Genflow Biosciences identified mutations of this gene in centenarians.  These minor mutations of the SIRT6 gene increase its ability to better repair DNA and then to delay aging.

Genflow Bioscience works under the belief that aging is not a natural process and can be halted or slowed by providing extra copies of this centenarian variant SIRT6 gene through gene therapy. Different kinds of mutations occur as generations go on, and gradual changes are made to the gene pool over time.

Gene mutations have been linked to diabetes, tumors, breast cancer and other cancer cells, and sickle cell anemia, which impacts hemoglobin production, but chromosomal translocation and environmental factors also play a part. There are also some tumor suppressor genes, such as brca1.

While this is a very general and simple summary of some of the most intricate components of life, the idea of grasping such complexity is no longer deemed incomprehensible. With our research and advanced technology that makes studying genetics even remotely possible, our understanding of the world around and inside of us grows each day.

This foundation of knowing just a handful of the gene types and transcription factors that exist allows us to think more provocatively about how medicine can be used for mammals with gene-specific disorders and maybe someday how to prevent them in the first place.

PrevPreviousPremature Aging: Here’s How to Prevent It
NextWhat Is Biotechnology & What Is It Used For?Next