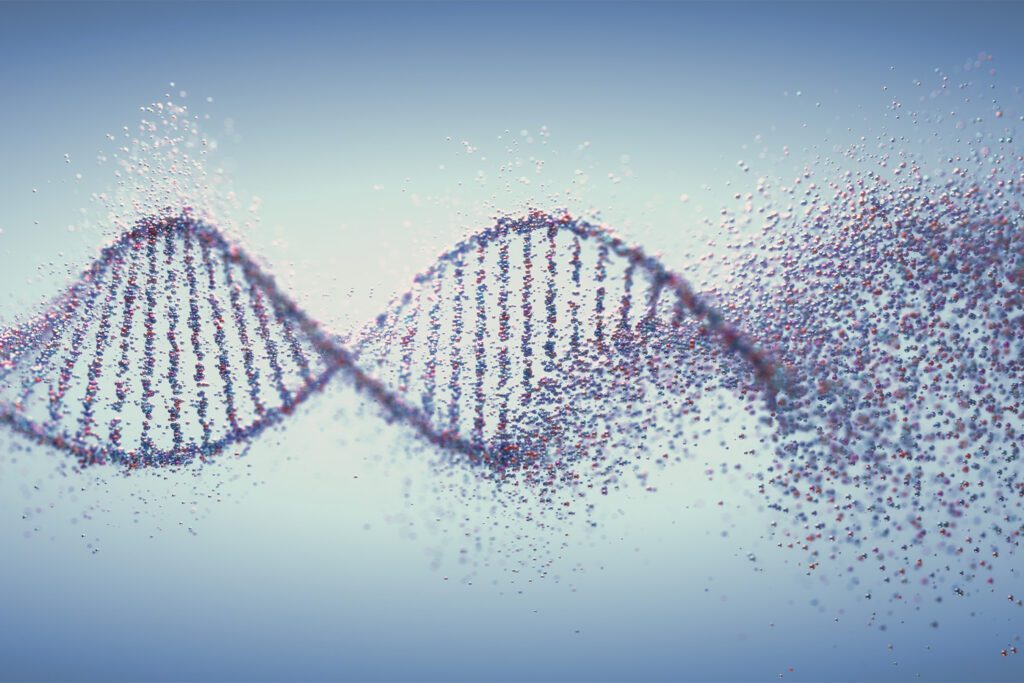 DNA: it’s what makes you, you. It’s not only the genetic material that makes up your physical features and parts of your personality, but it is also responsible for conducting your body’s functions and keeping your cells going.

But did you know that your DNA could potentially be damaged? It’s more common than you might think because DNA damage naturally occurs with age.

We’ll get into the specifics in a moment, but DNA damage is something you should try to avoid if possible, and you should seek to repair your DNA if it’s already happened to you.

So let’s take a look at DNA damage, how it occurs, what problems it can cause, and what to do if you start to feel its effects.

How Does DNA Get Damaged?

As mentioned before, DNA damage is something that occurs naturally as the years add to your life. The wear and tear that your DNA and your entire body go through are somewhat unavoidable.
Here are some of the mechanisms by which DNA gets damaged. If we get a better understanding of how our DNA gets damaged, we can learn how we can fix it.

One of the most common causes of damage to DNA is oxidative damage.

Oxidative damage takes place when hydroxyl radicals are introduced into the cell. They’re typically introduced via UV radiation from excess sunshine or other sources. But they can even be produced from certain natural enzymes reacting in the cell.

These radicals are very reactive to the DNA, specifically one of the four bases of the DNA called guanine.

The guanine base is altered, so when that DNA strand replicates a mutation takes place where that guanine is changed into thymine.

Sometimes an alkylating agent is introduced into the cell, causing a mutation to your DNA.

Many alkylating agents in the environment can enter the cell, but sometimes these agents are created as a by-product of cellular metabolism. If your DNA is alkalized, a lesion is created on your DNA.

These lesions can be harmless, or they could cause real problems. If they become cytotoxic, they can halt replication, interrupt DNA transcription, and even reproduce mutated DNA.

One of the more inexplicable causes of DNA damage is the simple loss of a base. Your DNA has four different bases that combine by the thousands to form strands of deoxyribonucleic acid.

Occasionally, the wear and tear of cell life can cause one of these base molecules to become detached, leaving a gap in the DNA strand.

What Does DNA Damage Cause?

If enough of these reactions occur, a whole host of diseases could potentially come about. Carcinogenesis, rheumatoid arthritis, IBS, cardiovascular diseases, and more could be the result of oxidative damage to your DNA.

But DNA damage is also the root of many of the hallmarks of aging. These mechanisms of aging often occur from DNA damage but can also be perpetrated by it.

This can result in a lowered metabolism and worse energy management, which can be a difficult symptom of aging for many people to deal with. But the biggest symptom is far worse than that.

This concept is called cellular senescence, which is one of the nine hallmarks of aging. In moderate amounts, this can actually be a function your body uses to fight off cancer, but, with age, this process happens in unhealthy amounts.

Eventually, the DNA in your cells becomes too damaged. If your body recognizes these cells as having damaged DNA, it will put the cell into a state called senescence. This means that the cell is no longer able to reproduce, but metabolic functions of the cell continue.

Over the long term, these cells grow weak and die off, resulting in a lowered number of reproducing cells in your tissues. This can lead to weakened organs and an increased risk of age-related disease.

This is one of the more scary symptoms of aging, and it can have a dramatic effect on your quality of life.

How Can DNA Get Repaired?

This brings us to the million-dollar question: how can DNA get repaired? Luckily, we live in a day and age where innovation in medical science has provided us with treatment. You don’t have to be at the mercy of the symptoms of aging. You can do something about it.

Your body contains certain genes that are specifically tasked with repairing and maintaining your DNA. This family of genes is called sirtuins.

There are seven different types of sirtuins, ranging from SIRT1 to SIRT7.

Sirtuins may be the key to turning back the clock and keeping away the hallmarks of age.

For this reason, scientists have begun to develop a medical treatment to activate sirtuin in the body. They theorize that by enhancing your body’s natural ability to restore DNA, they can help reduce the effects of aging on your body.

This theory seems to hold water in scientific research.

One study at the University of Rochester seems to confirm a link between SIRT genes and age. They compared the quality of the SIRT6 gene in organisms with a short lifespan with SIRT6 with a longer lifespan.

They found that the organisms with longer lifespans had evolved a more robust version of the SIRT6 gene. Because of this, research stands to reason that sirtuin activators that enhance the strength of your SIRT genes could be effective age treatment.

Where Can I Find This Treatment?

The best place to get this revolutionary sirtuin treatment is with Gen Flow Biosciences — with the development of an innovative compound called GF-1002 that targets the SIRT6 gene.

The amazing part about this therapy is that it doesn’t only target one hallmark of aging as many anti-age treatments do. By targeting cellular repair, GF-1002 can provide help with several hallmarks of aging for maximum benefit.

Gen Flow’s team of scientists are not only experts in their field, but they have had decades of collective experience in the pharmaceutical and biotech industries. GF-1002 has shown promising results in its preclinical trial phase, and the company is optimistic about how it will fare in the clinical trials in the next 24 months.

Now you know everything you need to know about DNA damage. We all know that aging can be challenging to navigate, bringing new health and functional challenges. Now you have a better understanding of what causes those changes.

But you don’t have to let age change your life for the worse. There is treatment out there that seeks to make a meaningful difference in your age and turn back the clock. With the SIRT6 activation that GF-1002 can bring, you can reduce the hold that age has on you and live a better life.

The Hallmarks of Aging | National Institutes of Health